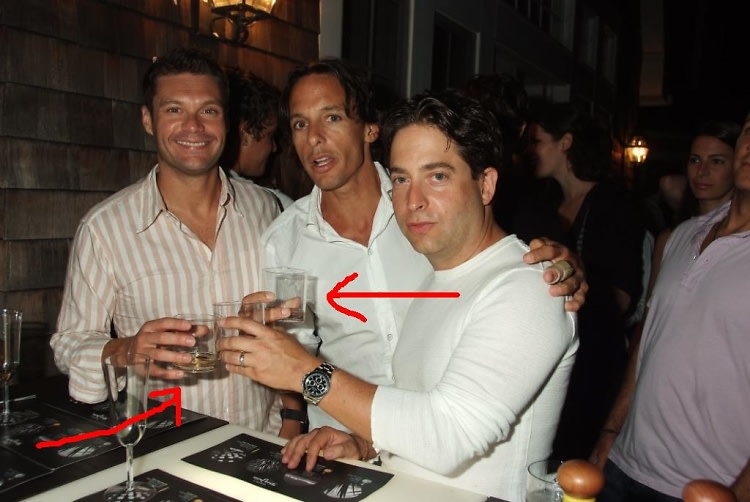 While we always talk about who was at the party (or who wasn’t, as the case seems to be), there is one thing we have failed to report. We have not yet given true coverage to the hottest accessories that everyone’s carrying: the cocktail. Below is drink-o-log of what all these fashionable scenesters are guzzling down as they hop from fete to fete:

From the lavish Belvedere Bash the infamous Patrick Duffy recently threw on Fire Island for his best pals Nick Balestrieri and David Yassky, with guests such as Patrick McMullan, to this weekend's 4th of July fetes at The Grey Goose Manor, The Estate, Kobe Beach Club, and BRAVO Housewife Jill Zarin’s, we have tasted enough cocktails to keep ourselves buzzing all summer long!

We all gathered for festivities which included mouth-watering gourmet BBQ dishes and amazing desserts prepared by Top Chef finalist Cynthia Sestito. The ribs were amazing, as was Cynthia’s grilled chicken, which we were told included Grey Goose vodka in the sauce! Throughout the grounds guests at the 100-150 person party played ping-pong, threw footballs, and mingled at the fabulous 4th of July dinner party which was decorated with gorgeous candelabras and festive red tablecloths. We even danced on the manicured lawn as the DJ spun from a balcony up above. Luckily there was plenty of Fiji Water and Vitamin Energy on hand for us to down following our dancing session. Initially, we had a little trouble finding the impressive manor hidden in the north part of East Hampton, but the Cadillac Escalade driving in front of us led us right into the driveway of the secret adult play land.

The night prior, we mingled and mixed at the annual 4th of July party of Real Housewife Jill Zarin and her husband Bobby. We chatted with the lovely Bethanny Frankel in the kitchen while we hid from some brief rain outside, where we tasted her delectable cupcakes before heading downstairs to the arcade room. We saw News12LongIsland hottie host Gina Glickman, and other Hamptons scene fixtures, such as the above-mentioned favorite photographer, Patrick McMullan. We asked him where his son Liam was, but unfortunately he said he would not be at the party.

We had overheard while walking up to her three-story house that there was another party happening at The Estate, owned by Tenjune's Mark Birnbaum and Eugene Remm, also in Sag Harbor, that Ryan Seacrest, Mary Kate Olson, and Jessica Stam were all at the Don Julio 4th of July private party with Epic Records head honcho Charlie Walk. We will have to make sure we RSVP for their next bash, as who doesn't love a little Seacrest?

We than hit SHADOW PR partner Lisette Sand-Freedman's birthday bash at Jeffrey Chodorow’s Kobe Beach Club, where we sipped Chandon at the East Hampton steakhouse amongst all of her fabulous friends and Hampton-ites, before entering the madness of Diddy's Ciroq bash next door in Lily Pond. It was so crazy, as is any Diddy party, so we headed back into Kobe Beach Club where we could mix and mingle with all the NYC PR guys and gals present at Lisette’s, and again ran into our favorite author of the summer, Jasmin Rosemberg.

This girl sure does know "how to Hampton," smiling and looking fabulous with her Chandon and cherry filled champagne flute in hand! We were worried all of the balloons consuming the arched ceiling for the PR power-house's bday bash may pop from the Samurai Swords that decorated the ceiling, but the balloons held their ground.

[Fourth Of July With The Real Housewives]