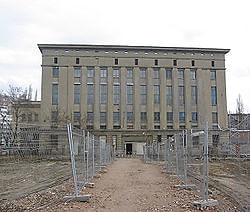 Berlin's Berghain/Panorama Bar, widely considered Planet Earth's top nightclub, has teamed up with the heroic Bunker crew for a quarterly exchange program at Public Assembly. The bash kicks off May 21st. That sound you just heard was NYC's dance party underground fainting from excitement.

Berghain is the imposing converted power plant that has become something of a Wailing Wall for international club kid pilgrims. Panorama Bar is a smaller club-within-a-club tucked away on the third floor. It's a more intimate but equally raucous counterpart to Berghain's massive main floor. Panorama DJs tend to favor the house-ier side of electronic music. Berghain largely sticks to more minimalist, militant techno. Both are recommended experiences.

Public Assembly will do what it can to replicate the vibe. The good news is the Williamsburg venue is divided into two rooms that can accommodate eclectic spinners. Unfortunately, the Bunker party wraps up at 6am, which is about the time Berghain visitors being to line up for the club's 48-hour blowouts. Also, public sex cubicles probably won't pass the health department on these shores.

No matter though. Local djs have been making the spiritual journey to Berlin for years. So the 180, which begins on the 21st with talented Krauts Shed and Prosumer is welcome.

Cameras (and mirrors!) are strictly forbidden at Berghain and Panorama (on account of, well, you can imagine), but some troublemakers scored grainy, shaky footage of what Bunker is trying to capture: