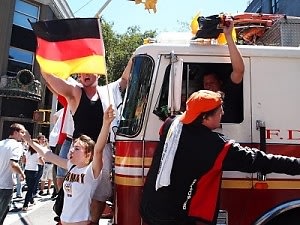 Wursts and lederhosen might not be popping up in the East Village as frequently as ramen and karaoke joints. But there's been a noticeable boom in deutschophiles and the places that cater to them in the last year or so.

Germans aren't entering uncharted waters in the East Village. The neighborhood preceded Yorkville as Manhattan's Little Germany (or Kleindeutschland) in the late 19th century. And many of its old school buildings, including the Ottendorfer branch of the New York Public Library, still bear German inscriptions.

Everything old is new again. And despite a much-publicized exodus of NYC artists to the greener and, more importantly, cheaper pastures of Berlin, Little Germany is having a resurgence.

Avenue C's Zum Schneider, though a decade old, was ground zero for this summer's Germanic Wold Cup celebrations. Things got raucous enough for EV blogger Jeremiah to question the true fealty of the long-neglected sport's overnight fans. Whether or not the tournament celebrations it hosted were authentic, Zum Schneider will recognize its 10th Birthday August 19th and 22nd. 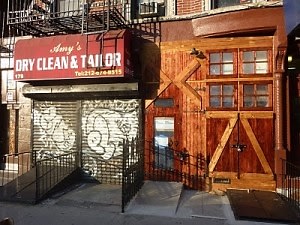 Not far from Zum Schneider, a "German burger" joint named Karza Haus is primed to open near 7th and Avenue B.

Given this influx, it's understandable that EV Grieve would confuse plywood modeled after the Belgian flag as another demonstration of German pride. The flags share the same colors. And, come on, Belgium is...Belgium. But just because two upcoming restaurants that wrapped themselves in the black, red and yellow are more about waffles than sauerbraten doesn't mean the East Village has seen the last of the German resettlement.