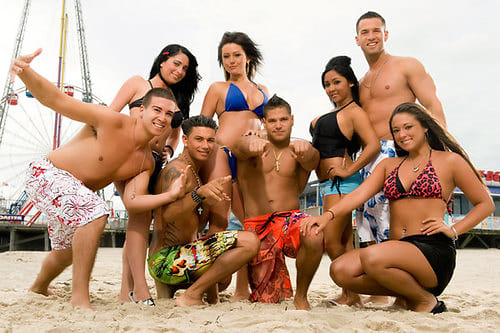 Forget about the Comcast-NBC merger today, the real event that is going to be changing the game is going to happen tonight at 10 pm on MTV.  It's hard to determine at this point just how much of an impact this show will have on our lives, but one thing is certain: you will need some adequate time to catch up on all things Guido. Meet the cast HERE!

From  "Everything You Need To Know: The Guido" 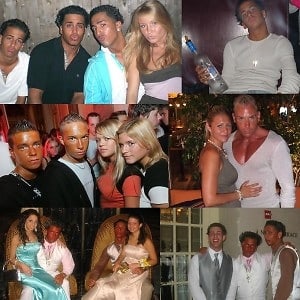 What is a Guido? This is a question that has occupied some of the finest minds of our generation. Although some have come remarkably close to capturing the zeitgeist of the Guido, none have completely wrapped their mind around the profundity of this question. Rather than attempt at what others have failed, we thought it better to lay down the agreed upon facts and our own individual findings and let you come to your own conclusions. After all, the Guido has a slightly different place in all of our hearts.

The Guido is primarily indigenous to StrongLong Island, however, researchers note that the New Jersey shore, Rhode Island and Massachusetts, also enjoy thriving Guido populations. Whether the Guido came about in a Lazarus-like autogenesis or started as a few blue-collared boys led astray, no one quite knows. What we do know is that with the advent of dance music, mainstream steroid use and the reality tv show “Growing up Gotti,” the population of this species has swelled and looks poised to continue healthy and sustained growth-rate into the future.

The StrongLong Island Guido resides almost entirely in Nassau County and the Five Towns. The preponderance of World Gym franchises, fake tanning salons and barbers willing to give a man a “blowout” haircut, make these locations a desirable habitat for the Guido. The importance of the Guido bouffant cannot be overlooked. Guidos don’t like sideburns, they frequently sport negative sideburns and a shaved neckline (”blowout”) in combination with a thin chin-strap of facial hair. Hair product use is common as is bird-shit -like coloring. The Guido’s mindset usually maintains that the shorter your hair, the tougher you are, however, many Guidos prefer a spiked dew, and in that case they generally apply a gallon of spluge and spike the front, top, side and rear of their head, creating a sonic-the-hedgehog or spiked helmet look.

In the summertime these creatures often migrate further east, and can be found lurking in the dark recesses of the Hamptons, such as the hamlets of East Quogue, HarlemHampton Bays and any mattress they can find north of montauk highway. The Guido’s mode of transportation is always leased and usually overcrowded. Due to their life prioritization structures of hard-partying first, it is difficult for them to obtain gainful employment and acquire meaningful assets. They are known for traveling light; men sporting only a fannypack for assorted stimulants, and women even less, a toothbrush and occasionally a tube of toothpaste.

The Guido’s diet consists mainly of Red Bull, Stacker 2 and a variety of other Met-Rx Supplements (which makes them very gassy). Their leisure time includes flexing, posing, going to the gym to work on their barstool bodies (i.e. blasting their bis and tris) and doing “loser laps” in their cars down main streets and cat-calling at girls.

Appearance is a religion for the Guido. Male forms often wax eyebrows, fake tan, and are often looking for any excuse to take off their shirts. The men are known to regularly try on two or three different outfits before going out, and the women about one or two. Fake boobs, butt implants, synthetic bodies and tattoos are expected. Bandanas, dew-rags, earrings, gum-chewing and sky-diving glasses during the night or day, are almost more common on men than women.

Having said all this, the best way to try defining the Guido is by understanding how the Guido defines himself…and that is how he parties. Some of their favorite watering holes in the summer include Neptunes in East Quogue, Canoe Place Inn, Foggey Goggle and of course Boardy Barn Sundays in Hampton Bays. At these mating grounds, you will see the Guido and the Guidette engaging in dance-offs, grunting, flexing and cackling discordantly. Much of what they learn in aerobics class and from pole-dancing, they bring to their recreational dancing. It is very athletic, and can best be described as an ecstasy-driven Dionysian release.

For future review, check out these video below. We hope this adequately prepares you for this very special broadcast event that is going to be taking place tonight!