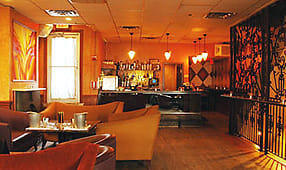 So there's this bar in between Dupont and Foggy Bottom called Ozio.  If you're over, say, 27 years old, you remember it in all its heyday glory.  If, however, you're a young buck, you might be wondering why we're even wasting our breath talking about Ozio and its upcoming rooftop. But Ozio is getting a rooftop deck, which could breathe life back into the former hot spot.

Let us tell you a tale about Ozio from the perspective of a former D.C. bartender, Eve, who was around for Ozio's reign:

"While it was cool to go to Ozio on any given night, the chicest place to be was the 3rd (and top) floor.  I saw a bit of everything there from the upper crust and their mistresses to David Blaine and his card tricks.  If there’s anyplace better to be than the “penthouse” of the club, it’s undoubtedly the rooftop"

How right you are, Eve.  Other clubs and lounges have recently added roof decks and enjoyed serious surges in business and popularity as a result.  Case in point: Current and Eden.  Who doesn't want to be drinking outside when it's nice out?

So when we heard Ozio plans to follow suit, we couldn't help but wonder whether or not a roof deck would be the remedy to Ozio's decline in popularity.

In every city, there are always a few spots that can stand tall against the new ‘kids on the block’ no matter what.  So what’s their secret?  They stay true to their concept, loyal to locals and understand that quality, relationships and keeping up with the new trends are important elements to keeping up with competitors. 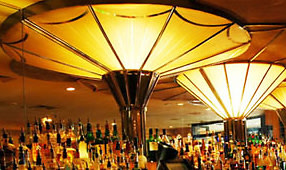 Ozio, a cigar and martini lounge, has been around for over a decade.  With their art deco light fixtures over the bar, four floors and the extensive martini and bar menu, the place has been successful at keeping up with the trends and the competition.  However, the nightlife in D.C. has changed a lot over the years. Although the venue has done consistently well, it was booming with business back in the day in a way that it's not now.

In the early years of the millennium, D.C. waterholes consisted of a handful of college bars, a number of Capitol Hill bars, old-school Georgetown landmarks, and a bunch of loungy/clubby-type spots.  Now we can't keep up with how many open up in one month.

Back then, Ozio was one of the only a few players in the game that was always able to attract a pull of every one of those groups, making the venue one of the hottest and most diverse spots in town.   Although it's a cigar and martini lounge, the place has always catered to the young night club goers; and back in the day, Ozio was absolutely the place to be.

It was normal to see the long lines forming down the streets as party goers waited to get into the place.  Limos, Range Rovers and Porsches in front of the valet were expected, and everyone knew that it was the place where some of the wealthiest people in town hung out. From old rich guys with their mistresses to GW, AU and Georgetown kids, pulling out their mommy and daddy's black AMEX to buy bottles and bottles of Dom and Veuve.

We have a funny feeling a new rooftop will put Ozio back on the map.