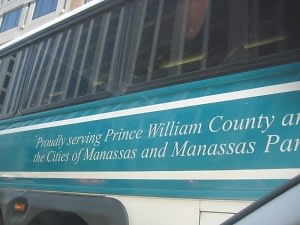 The intersection at 14th and H Streets NW can be treacherous, but only between the hours of 7 - 10 AM, in addition to 4:30 PM - 7:30 PM.  And the congestion isn't even really caused by cars.  It's caused by those awful coach buses--this shit has got to stop.

The buses cart people back and forth between downtown DC and the far away places such as Manassass, PGC and Dale City.  In theory the whole communal ride thing is a desirable alternative to individuals driving only themselves to and from work everyday.  But, how good for the environment can it really be when cars, Metro Buses AND the coach buses sit idling on H Street NW for 10 whole minutes before budging?

14th and H NW is an obvious hub of DC's business district, but it also happens to be the site of a lone residential building (with the exception of the White House) in the area, The Woodward.  God forbid Woodward residents try to get in or out of their garage during rush hour--it probably takes an extra 15 minutes to maneuver through the jerks who refuse to make way lest Woodwardians cut them off.

Don't post up at the busiest intersections.  Your passengers can walk a few extra blocks in whatever direction to catch you at a point where you won't single-handedly determine traffic patterns

Don't travel along routes already designated for Metro Buses.  It only takes about three or four buses to span the length of the block, and it's not uncommon for this travesty to occur.  Then everyone's screwed.  Including you.  Do you know how long it takes your big ass to make a turn on 14th Street?  Like, an entire green light's time.

Don't offer your only travel times when everyone else and their mother is commuting.  Make your passengers get up an hour earlier.  They'll get to and from work faster because they'll beat the rest of the traffic.  And you'll be reducing the already horrendous traffic and driving conditions in the District. 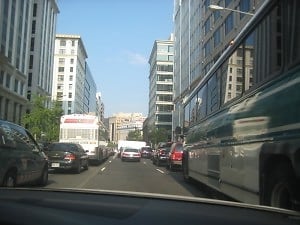 Coach buses in multiple lanes at 14th and H Streets NW...oh the horror 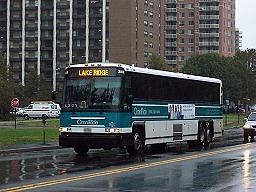 An OmniRide Dale City type bus in an unusual setting, i.e. NOT traffic.