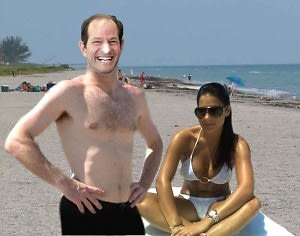 Why anyone decided Eliot Spitzer was a good character to host a politically tinged talk show is almost as baffling as why the New York Post decided his strumpet Ashley Dupre should pen a love advice column.  And you can see all the wonderful awkwardness in the clip

released in anticipation of the October 4th premiere of the show we think will be called "Parker Spitzer," however we cannot be sure because Eliot and Kathleen seem a little confused about how to go about the difficult task of choosing a name for their show.

The only thing that got our blood pumping during this preview was when Kathleen says to Eliot:

"I think we need to talk about something important"

Because we hoped, for a split second, she was going to ask him what his views were vis-à-vis tax policy and prostitution.

Hopefully they'll address that issue when the show airs in its entirety.