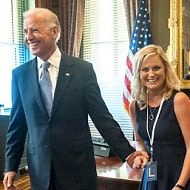 Just because the election is over doesn't mean you can avoid the politicians! NBC announced that the Veep - no, not Julia Louis-Dreyfuss - will be coming to Parks and Recreation! This certainly isn't a bunch of malarky! According to Entertainment Weekly, the episode will air on November 15. Biden's appearance may be small but with Leslie Knope's public admiration for the Vice President, it is guaranteed to pack a punch.

Amy Poehler & Co. came to the District earlier this year to hang out at the Hay Adams with John McCain, Olympia Snowe and Barbara Boxer.