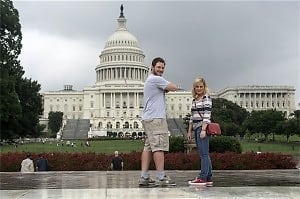 We've told you all about TV's obsession with DC and we can add another show to the list! The gang from NBC's Park and Recreation started off their new season with a quick trip to The District! The Click tuned in last night and broke down the episode. Amy Poehler's Leslie Knope described the women of DC as the offspring of "C-SPAN and Neiman Marcus" and I'm not sure if I'd disagree. Several of DC's power players in the episode included John McCain, Olympia Snowe and Barbara Boxer.

Of course the department from Pawnee, Indiana stopped by some of the touristy spots (think the National Mall and the Capitol Building) but they also hit up the Hay Adams. Unfortunately, the episode was a one time deal and Knope and her rag-tag team headed back to Indiana.