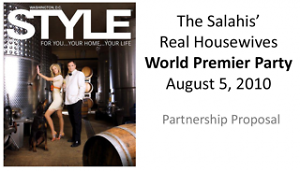 In case anyone has lost track of the countdown to the premiere of Real Housewives of DC (how could you lose count?  You've been looking forward to it all summer), it premieres Thursday August 5th at 9 PM.  And the Salahis are hosting their own party (which they will not have to crash).

The "Partnership Proposal" has a number of curious typos, fibs, and all-around baffling aspects:

-The word they are trying to use, "premiere," signifies the first performance of something (in both the noun and verb forms).  The word they use, "premier" means first in terms of importance or position.  Typo or intentional jab at the other housewives who may or may not be hosting their own premiere parties?

-The event is already sponsored by DC's Most Fabulous magazine, of which we've admittedly never seen a physical copy.

"Red Carpet" is not a proper noun, therefore must not be capitalized.  It's just the red carpet.  Capitalizing it doesn't make it look more important.  It makes your publicist look silly for not knowing good English.

Through all of this razzle dazzle, they never mention where the actual premiere party is, which seems curious given the price tags of various levels of sponsorship.

We gotta hand it to them, though: they're really milking this whole White House shenanigans for all its worth.  The Partnership Proposal--sorry, partnership proposal--touts them as the show's "main stars," and I have to say I agree.  While they may not be what keeps viewers coming back for more, they will certainly be what keeps new viewers tuning in in droves--everyone wants to know what a White House crasher looks like and lives like. 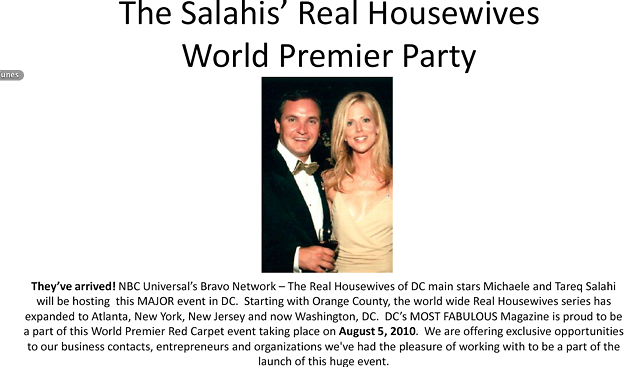 Disclaimer: I do not claim that Guest of a Guest will always be entirely grammatically sound.  But that's because we write super fast and super often and sometimes haste causes errors.  The Salahis' partnership proposal hopefully warranted more than an hour's worth of time to be constructed, and therefore its grammatical shortcomings are proportionally egregious.