Hub Culture grudgingly included NYC on its 2010 Zeitgeist Ranking of the world's most dynamic places. New York is too big to ignore, despite its "failure to convey a vision of excitement about the future" and a "dark cloud over the city." Hey, at least we're cooler than London!

Crime-ridden, blackout-prone Sāo Paolo topped the list, since, unbeknownst to anyone, Brazil "suddenly seems to be everyone's darling, and gigantic São Paulo is where everything in Brazil happens." Berlin was runner-up. And San Francisco took the bronze, being lauded for the twin horrors of holier-than-though locavorism and inane social networking the City by the Bay unleashed upon the nation.  (Play Farmville and kill two free range birds with one stone!) 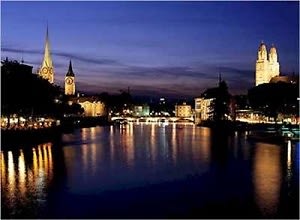 The biggest shocker in the top 10 was #6 Zurich,  which even the ranking's authors deemed "sleepy." (This backs up the "Beautiful but boring" party line used by anyone I know who has ever visited the place.) But investment bankers are flocking there in droves which, I guess, should make things really exciting? Anyway, you can't talk about Switzerland without mentioning Orson Welles' quip about the sissy country:

"In Italy, for thirty years under the Borgias, they had warfare, terror, murder and bloodshed, but they produced Michelangelo, Leonardo da Vinci and the Renaissance. In Switzerland, they had brotherly love, they had five hundred years of democracy and peace – and what did that produce? The cuckoo clock."

As for the website's lukewarm endorsement of 8th-place Gotham:

"New York is creeping back to the edge. Up a spot this year, NYC is always in the top 10, never doing much to demand a move up or down. The city remains so large and so powerful that its pull on the collective perspective is indisputably overwhelming, but fails to convey a vision of excitement about the future. Even though the sterile nightlife has gotten edgier, it still feels like there is a dark cloud over the city. Layoffs continue, and the general mood is sour. With advertising, fashion, media and Wall Street all reeling, the city is waiting for Godot - and a vision of future leadership that just isn't there... yet."

Los Angeles, Shanghai and Sydney also placed ahead of NYC based on Hub Culture's comically vague criteria. ("There is no formula for determining how the scene changes. Like collective wisdom, it just is, and later, always seems inevitable, at least to us.")

At least New York beat out the Old Smoke, which seems to be suffering from a hangover familiar to its binge drinking hooligans and useless monarchy:

"Like a Royal with Tanqueray at breakfast, London seems to have hit bottom."