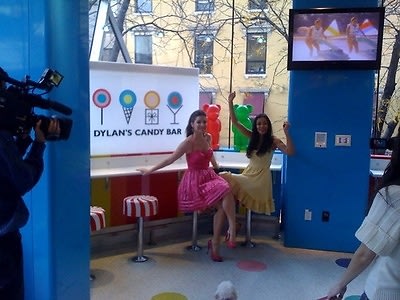 [Where is everyone?  Photo via nonsociety]

A tipster writes that the much hyped about, blogged about, and emailed about Julia Allison and company NonSociety lip dub at Dylan's Candy shop wasn't all that well attended...

I hear that Julia Allison's Nonsociety Lip Dub party was a totally flop. No one showed up to the meet and greet/publicity stunt! Take a look at the pictures on the nonsociety site...no one is in there or posing with the gals!

Earlier we had wondered if Julia Allison's cohort Mary Rambin would have a bigger turnout for their event at Dylan's than her younger sister Leven Rambin's event at the Eldridge.  Looks like we may have found the answer.  Given all the PR work that was put into the event by fameball Allison & co., and all the tempting delectable treats at Dylan's, we would have bet on Mary winning this one.  But alas, a guess is only a guess.