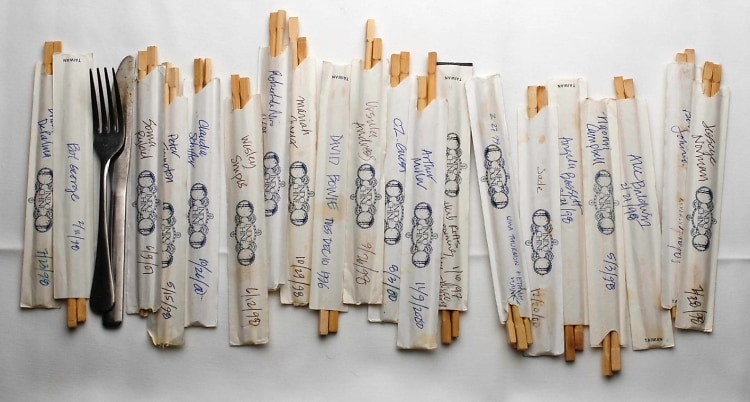 In New York, a restaurant that makes it 10 years might as well qualify for a plaque from the Landmarks Preservation Commission. So you've got to hand it to Indochine as the Lafayette Street classic celebrates its 25th Anniversary with a party, and a book! More photos and story below...

Indochine was one of the first hangouts to straddle the uptown and downtown scenes as the two began to conflate in the art- and junk bond-fueled '80s. Consider the placement on Indochine's boldface name-studded seating chart (in Page Six on September 14th, 1997, and on the back of the party invite for tonight) of Ivana Trump and Ed Koch just a spring roll's throw away from Marc Jacobs and David Bowie. 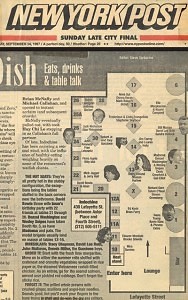 Speaking of seating charts, Indochine was among the first joints to apply them below 14th Street (and, unlike the Four Seasons, to a hot crowd not nearing Depends age). Always ahead of the curve, the French-colonial spot also foresaw the foodie fusion trend that no one could escape in the '90s.

As we mentioned earlier, Indochine's influence can be spotted all over town. But you really ought to take in the real thing. Nothing beats an original, and few, if any, of Indochine's wan imitators can boast the following: Andy Warhol partied here.

Read what other famous NYC figures have to say about Indochine, and go buy the book, published exclusively by Rizzoli, for more exclusive photos and quotes from one of the best. Check back tomorrow for our coverage of the anniversary party!

André Balazs: "Indochine is somehow a place that one constantly stumbles back into and rediscovers. A long stretch of time will pass by and suddenly you’ll go back and realize, “This is so great.” Like all good public places, it has layers of veneer, all of which contribute to its success—it’s not just the food, it’s not just the room, it’s not just the social part, or the location, it’s all of them, and Indochine has that unique combination."

Andrea Rosen: "Indochine opened the same year that I moved to New York, in 1984. So there’s an interesting trajectory with what I consider my own history in New York."

Jason Pomeranc: "I recall going to Indochine in its early years as a teen, when I was lucky enough to be invited by my brothers or older friends. I was too young to experience the heyday of studio 54 and Xenon, but I recall having a complete sensory overload, as the energy was so powerful in the room...To truly capture the essence of Indochine, you need to see it on a night not filled with supermodels, rock stars, and celebrities, but rather during their legendary staff Christmas parties. They are wild, theatrical and completely unique." 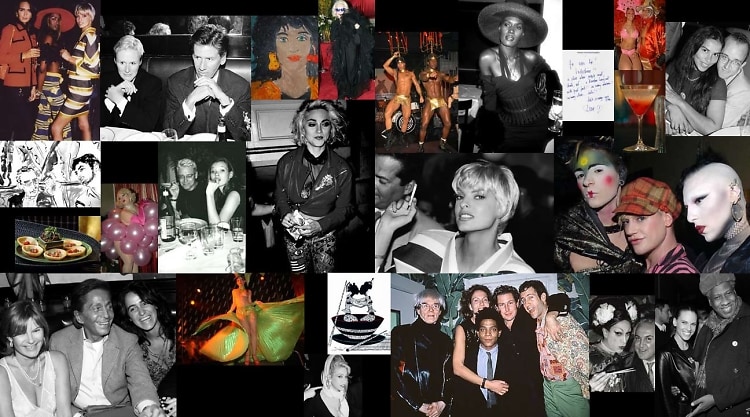 Cindy Crawford: "Stephen Knoll threw this big bash for me at Indochine in early ’05. It was a total blowout, a “this could only happen in New York” kind of party. It had the beautiful people plus the eccentrics, the trannies, the Dirty Martini girl wearing the pasties. It didn’t let you down."

Jorg Rae: "There must be some spice in the food that makes pregnant women give birth. Cindy Crawford, Sarah Jessica Parker, Christy Turlington, and recently Naomi Watts, gave birth within twelve to forty-eight hours of having a meal at Indochine. Probably just a coincidence, though. But then again…" 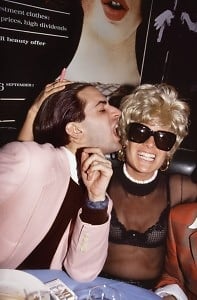 Athena Calderone: "I went into labor at Indochine on Valentines night in 2003. I’ve heard a number of famous women also went into labor after eating there. It’s gone on to become a bit of an urban myth. Many women have asked me what I ate that night. It was the number 26, red snapper with spicy sweet and sour pimento sauce."

Padma Lakshmi: "The food is fantastic, and it’s pretty consistent. Not only is it delicious, but it’s pretty light and clean. So, if you’re trying to watch your weight, or detox from Top Chef, it’s not a bad place to go."

Roman Alonzo: "The food has never changed, but somehow we never got sick of it. How many of those spring rolls can you eat? A lot, I guess! I think its success has to do with the lighting too. It’s the most attractive lighting. We like to see each other in it."

Cindy Crawford: "When I lived in New York, in the Police Building, I’d go to Indochine on Sunday nights for takeout. It felt like the neighborhood place."

Ann Dexter-Jones: "I love the soups, the fish, especially the Chilean seabass-they cook it in this wonderful broth. And what’s nice is, and what I love about that kind of food is, everyone orders something different…it’s like eating off somebody else’s plate. I’m one of those people who wants what’s across the table, because I’d like to order everything. That’s why I love Asian food. I love to share. Having five children, just to eliminate any squabbles of what’s mine and what’s yours, I repeated my mantra to them: “We love to share, don’t we.”"

Fran Lebowitz: "The thing that I most like there are the dumplings. You’re supposed to share them, but I do not. And when people say, “Let’s get some dumplings,” I say: “Fine, let’s get some, and I will also get some."