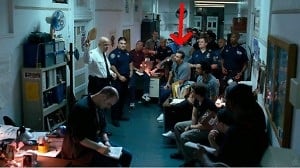 Wass Stevens is one of the best-known and most feared doormen in New York. But when he's not screening aspiring party people at Avenue and Marquee, Wass is putting in some screen time of his own. His latest movie, Brooklyn's Finest, opens March 5th. And the only barrier to entry will be that $12.50 ticket.

Wass has been on a cinematic role lately, with significant roles opposite Nicolas Cage in World Trade Center and Mickey Rourke (a friend to every bouncer in the tri-state area) in The Wrestler. He had one of the latter film's more memorable lines when he offered Rourke's down and out fighter some pearls of wisdom: "Two words: Re. Match."

Brooklyn's Finest--the first movie picked up at Sundance last year--brings the Bensonhurst native back to his old stomping grounds for a story about a group of Kings County cops struggling with the consequences of a massive drug bust (gone wrong!).

Wass's movie career is on a roll. But he shouldn't quit his day (night?) job. We'd like to see what might happen when a celeb-magnet club's gatekeeper gets to be a bigger name than anyone he deigns to let inside.