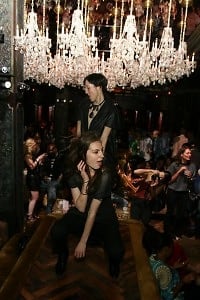 [The Griffin in better times]. Last week when we opened the question on the fate of Griffin, citing bounced checks and the "departure" of Rachel Uchitel, we apparently created quite the storm. Some said Griffin was done, others said it wasn't so. Steve Lewis did some further sleuthing on the fate of MeatPacking's white knight, and found that they are in fact strapped for cash and that there is quite a lot of internal strife among the management.

“The long-delayed opening of the space was a major problem ... we could really use an infusion of cash,” said one of my sources. He continued..."it’s just three owners who really don’t trust each other".

That being said, apparently Griffin is selling a significant volume of liquor, but lack the necessary "working capital".

Translation: Sales are strong, but maybe not enough to keep it afloat.

If management puts their heads together (and pulls them out of their arses), they might be able to reduce their debt service, or do some basic restructuring and cost-cutting to make this place work. But if they keep the petty infighting up for much longer, their days could very well be numbered.

I smell loads of fashion week parties coming up at the Griffin. And we all do wish them the best in the days and weeks ahead...