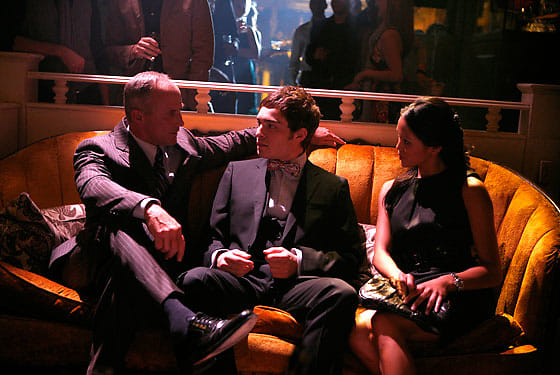 Gossip Girl came back last night in what was our favorite episode yet. Drug deals made among parents, awkward teenage sex dialogue, and nights on stage at The Box?!  (They took my advice afterall). God we love this show. In fact, on further reflection, it has been a long long since any show has had an effect like this on us (maybe as far back even as "My So Called Life"). That being said, giving up plans to stay at home with our delivery food...we feel like 14 year old girls and we don't care. Here were some of the more defining moments for us last night:

-First, the scenes at The Box! We can't believe that this place has already been around long enough to be documented by a teenage drama show. Anyone that's ever been there knows it's never that empty after midnight, however it seems they are highlighting the place at the very start of its inception (they are looking for Financers). Then we remembered the first time we went to the place at the start of the year, it was very chill (almost like Bungalow-ish) and very easy to walk around. Now the place is elbow to elbow with people snapping pictures at every move made, exclaiming all the while how cool it is that they are there. But Gossip Girl brought us back to the good old days, before the bathroom floodings and scary stalkers lurking outside, and we love them for it.

-Next, what the fuck is Jenny's problem?! We realize she's only a freshman but what a retard! This is the girl that has the balls to lock bad boy Chuck on a rooftop with no clothes in the last episode. Now we're supposed to believe that her conscious grew so big in 2 weeks that she can't bear living with hiding a secret from Blair?! Not sure why we care so much that Blair and Nate make it work, but man that IPO was a big deal for Nate's dad and he has enough problems as it is, can't they just all play along until they graduate?

-Serena's mole is mesmerizing. It's literally all we can focus on when she comes on screen. That and the fact that when she speaks her mouth moves funny. Dan looks weird when he talks now that we think about it.

-Loving how they are all taking their school uniforms and making them their own, but for the record, you would never be able to tweak a uniform into your own personal style like that at any private school here. I mean Blair's had a completely different lining. Oh and those two Asians bug the shit out of us.

Well that's all we can think of at the moment. Oh wait, the limo scene was awesome, as was the awkward makeout session in Dan's apartment. Besides loving seeing our city as the background in this show, we think the main reason we are drawn to it, just like in any good teenage drama series, is that it brings us back to those extremely awkward phases of our own youth that we yearn to go back to sometimes, but are mostly so grateful we've made it past alive.