Johnny Pigozzi got all of his friends together (like Andre Balazs and Tony Hawk) to help him launch his first "LimoLand" store in the Meatpacking District this Friday.  Our writer, David Shapiro, stopped by the event and chatted it up with Balazs and other guests, and then whipped up this report via his blackberry for us to share (in unaltered and unedited form): 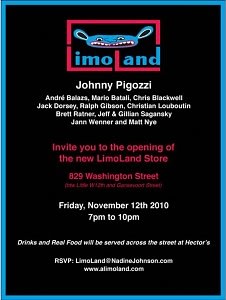 "right now i am standing outside the opening of a new clothing store in the meatpacking district. my friend nate who is reporting on this event for another publication is having a cigarette next to me and talking to a blonde girl who is also a reporter. a few minutes ago, me and nate and the blonde girl were inside the store, it was very bright and crowded, and there was a flat-screen TV on the wall playing a slideshow of the celebrities that were attending the store opening. in the slideshow there was a picture of Brett Ratner laying on a bed in a hotel room and under the picture it said "Brett Ratner, The Filmmaker". there were some other celebrities in the slideshow but they were mostly fashion industry people so i didn't recognize them. me and nate stood in the back of the store looking for people to interview, and there was a cocktail waitress walking around with shots of tequila and i had a shot of tequila and then i waited like ten minutes and didn't feel it at all so i had another one 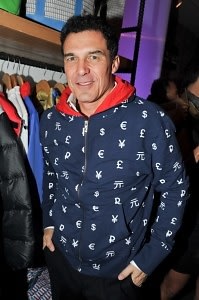 then i felt a little drunk and nate said "yo look over there" and pointed towards the door and i said "what should i be looking at?" and he says "it's Andre Balazs" who i know is a celebrityt hotelier/entrepreneur because he was described and interviewed in a long New York Magazine piece about how hotels have become the centers of New York nightlife from a couple months ago. and i said "i don't know which one of those guys he is" and then nate said "okay he's one of the people on the celebrity slideshow, just wait 'til his picture comes up and then you'll know" and then after like 15 seconds, a picture of Andre Balazs wearing a suit and hanging off the side of one of his hotels comes up on the TV screen

and i say "should we talk to him?" and then nate says "yeah definitely" and we walk over to him and wait until he is done with his conversation and then nate asks him some questions and i stand near them and wait my turn. i think about how some of the clothing here is really nice and i wish it wasn't so expensive. in the corner, a man is looking through a stack of green oxfords to find his size i think. Andre Balazs is wearing a hoodie that they are selling in the store that is really bright and has little cartoon designs all over it. i don't know anything about fashion but this sweatshirt looks ridiculous and i can't imagine that he would ever wear this thing outside of the opening for the store that sells it that maybe asked him to wear it

he is a few inches shorter than me and looks like he goes to the gym a lot and has very thick brown hair and he smiles a lot but sometimes it looks like he is forcing his face to smile and sometimes it looks like he is trying to force his face to smile but can only manage a grimace. and then nate is done talking to him and i introduce myself and say "hey my name is david, can i ask you one question please?" and he says "yes" and i say "if you couldn't work anymore, how much money do you think you would need to be comfortable for the rest of your life?"

his smile is definitely a grimace now, he is looking me in the eye, and he sounds very serious and says "i can't answer that question"

i smile and say "why not?", in a friendly and not defensive way, like i'm not prodding him to answer the question, i just am curious about his answer

i say "okay what would you be interested in talking about?" and now as i am reading this, that sounds more aggressive than it was but honestly i was not trying to prod him or be nasty, i just didn't want to ask him a boring question he had been asked a thousand times or some stupid softball question that nobody would care about

Andre Balazs is cold now and he says, dryly, "nothing for public consumption"

and i say "okay thanks anyway then!" and smile and start to walk away but i have to walk past him to get back to nate so me and Andre Balazs start to walk around each other 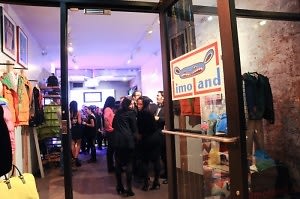 and then, as we are passing each other, he tries to force a smile again and looks me in the eye and says "but seriously, NOT a good question" and then he walks past me. i guess he could be right but i didn't think my question was like the worst question ever, maybe not a great question but maybe a serviceable one. i wonder what his answer would have been because maybe it would have revealed a lot about his lifestyle and him personally and when i read interviews i like the questions that seem to catch the subjects off guard but don't go as far as offending them but i guess i offended him. and then after he said that i felt really deflated, like imagine if you were a tennis player and you played Roger Federer and he destroyed you and then after the match when you are shaking hands at the net, he says to you, "your backhand sucks by the way". but i guess maybe it is part of his persona to be nasty so i didn't hold it against him

and then i found a cocktail waitress and had another shot of tequila and then i didn't see nate so i figured he was outside, so then i came outside and now i am outside and he is next to me smoking a cigarette and talking to the blonde girl as i mentioned before

Brett Ratner is outside too. he is on the phone and he is pacing back and forth down the blockk and having a heated phone conversation. he scruffy and 41 according to Wikipedia and has a little paunch and he is wearing a black wool beanie and pre-distressed jeans that look like they could be from that store G-Star Raw on Lafayette St., and gray New Balance 991 running sneakers and a black sweater. he walks to the end of the block and we can hear him yell "SUNDANCE! SUNDANCE!" into the phone 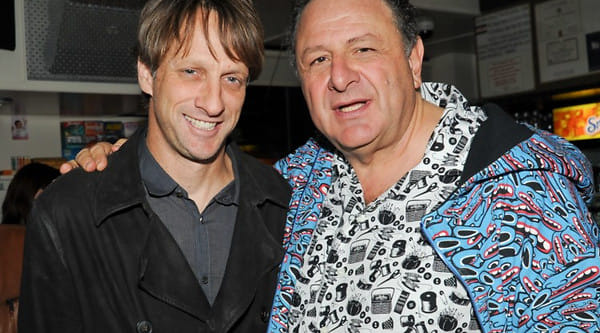 he paces back towards me and nate and the blonde girl and says "...it is UN-FUCKING-BE-LIEVE-A-BLE" and we wonder who he is talking to and what he is talking about, and then he walks past us and stands on the street next to an SUV and looks at his reflection in the tinted window of the SUV and adjusts his beanie with his free hand

we can hear him say "it's PAINFUL, taking those lines out one-by-one!"

and then he looks like he is wrapping up his phone call, he is not so heated anymore, and me and nate want to interview him, but then my editor from this website walks up to us and greets us and we talk for a minute and then when we finish talking, Brett Ratner is gone! we look for him inside and he isn't there either, so we get another tequila shot and i say to nate, "you wanna leave?" and he says "yeah okay" and then we leave"

Sent via BlackBerry from T-Mobile David Shapiro is 22 and lives in New York and has a Tumblr at www.pitchforkreviewsreviews.com

[Parking in the Meatpacking: Johnny Pigozzi]