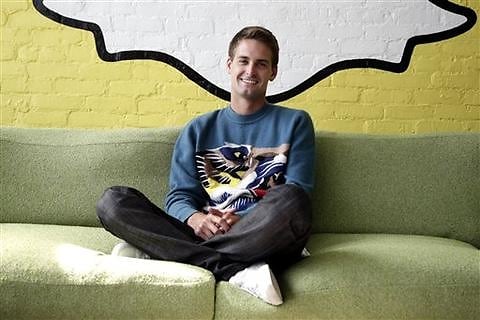 Even if you haven't spent many a drunken night sending selfies that both you AND your friends would much rather forget, there's no denying the ever-growing popularity of the photo app sensation, Snapchat. Because even if those embarrassing photos haven't been erased from our friends' memories, Snapchat makes sure they've been erased from their phones (and isn't that where it really counts?). With Twitter recently making waves by going public this month, the business end of the tech world has really been buzzing. The newest development to make headlines? Snapchat's shocking spurn of Facebook's $3 Billion offer to buy them out. The guy responsible for making so many in the biz scratch their heads is none other than Snapchat's 23-year-old, college dropout CEO, Evan Spiegel. Once we got wind of his little diss to the big man Zuckerberg, we scratched our heads, too—but we weren't wondering about a business deal, we wanted to know his deal! An (almost) Stanford grad, smart-talker, and dresser, we think this CEO is totally swoon-worthy.