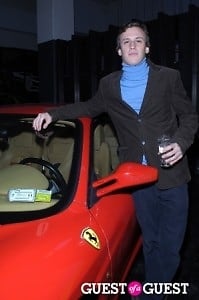 They act like they've been pulled from the celluloid of "Cruel Intentions" and spend their summer weekends on Hampton jaunts and sybaritic European getaways. These uppity members of New York's upper echelon have made a habit of forming exclusive online clubs as pitiable as they are earnest.

Because we recently discovered flagrant turtle neck-wearer Oliver Estreich, whose Native Society is a social network catering to prep school alums who grew up in New York City, it seems an appropriate moment to glance at some of these "jet-set" social networks hinging on this sort of affected exclusivity and affluence.

Perhaps the only response to such a ridiculous entity can come in axiomatic form, with the old Groucho Marx quip: "I don't care to belong to any club that will have me as a member."

To understand the Native Society, and its peculiar redonk-factor, we must take an atavistic glance at its predecessors.

Boiler-Plate: The network's site bills it as "a private community of internationally minded people from around the world." The network current has about 600,000 members. Has been dubbed "Snobster," a haughty version of Friendster.

Head: Chairman Patrick Liotard-Vogt is a red-headed entrepreneur based in Zurich. Now 25, he graduated from the PHW University of Business and Economics with a Bachelor's degree in Banking and Finance before earning a diploma in Trade&Commerce from the Akad Profession Business School in Zurich. He became a majority shareholder in ASMALLWORLD in October 2009. Liotard-Vogt's family members were early investors in Nestle at the beginning o the 20th century, and his great grandfather and grand father were CEOs and chairmen of Nestle. Leotard-Vogt bought ASW from Hollywood producers Bob and Harvey Weinstein.

Erik Wachtmeister originally founded the company in 2004. He is the son of Swedish Ambassador Count Wilhelm Wachtmeister and Countess Ulla Wachtmeister, an artist. He got a B.S. for foreign service from Georgetown in 1977 and got an MBA from INSEAD in 1983. He worked in corporate finance in London and New York before becoming the founding CEO of Viking Internet.

The Look: This is a business-suit-wearing collection of self-described taste makers.

Barriers-to-entry: Invite only. As the website states, "Trusted and loyal ASW members who meet certain criteria have the privilege of inviting a limited number of their friends to the network." This enclave thus keeps three-degrees of separation between its members.

Boiler-Plate: As per the website, "Affluence.org is a private social network where wealthy individual connect, share information and engage in meaningful conversations. Affluence.org also provides exclusive, high quality content and advice from experts on subjects such as art, technology, and travel."

Head: Doug Stukel serves as chairman of the company. He is currently a managing partner of Momentum Capital LLC, a boutique merchant banking and investment firm in Chicago. He was formerly a Board Member and Co-CEO of BSA Satellink, which transformed itself into the Affluence Corporation. He is the co-CEO and a board member at NaeroDynamics, Inc. and a director of Secured Digital Storage, Inc. He was a former director and co-CEO of Capital Growth Systems, a company operating in the bandwidth connectivity. Among his "likes" on Facebook: George W. Bush, Geico Piggy, Save Abandoned Babies, Mike Tomano's Wild&Free.

Mike Profita, who serves as COO and CFO of the company, has worked extensively in the  high-tech sphere. He was EVP and CFO at Apropos Technology and was president of thincSoft, LLC.

The Look: This set is more about bespoke suits, power ties, and expensive watches.

Boiler-Plate: "APrivateClub.com is a membership-based city guide that offers exclusive access to culture and entertainment in New York. Featuring the latest and most exciting places to go and experience, the website provides curated content that is available to both members and non-members" There are about 1,000 active members..

Barriers-to-entry: Interested prospective members much complete an application and have an in-person interviews. Members must be between 21 and 40.

Boiler-Plate: "QUBE is the exclusive complimentary online networking site brought to you by Quintessentially, the world's leading private members' club and luxury lifestyle group...Quintessentially is first and foremost a club, a club for those who believe that life is too short to waste time on the mundane or second-best."

Head: Aaron Simpson is a co-founder of Quintessentially. He graduated form Oxford and had a career in film production, ultimately establishing Flashlight Films.

Paul Drummond is a co-founder of Quintessentially. He graduated in law from Oxford and worked for Norton Rose from 1997 to 2000.

Boiler-Plate: "A private membership organization and social network founded by native New Yorkers and their friends." The group has about 170 members.

Head: Oliver Estreich, 24, went to Browning and George Washington University where he majored in marketing and psychology. He grew up at 85th and Park to designer Gail Green and luxury residential design architect David Estreich. Here's a quaint Home&Garden Times piece on Estreich's parents from 1985.  He has an older brother named Jonathan and a dachshund named Copperfield.

Barriers-to-entry. "It's really hard to get in, because you have to be evaluated," Estreich said. "You have to have the native sensibility. You have to have an understanding of culture, cars, fashion, people. It's kind of like: it's a mentality. I would go so far as to say that you have to be rich to get in, cause we have some people who aren't like that, but they offer certain aspects that help further the group as a whole. I decide. It's a lot of power for one person. I have a good perception of people."