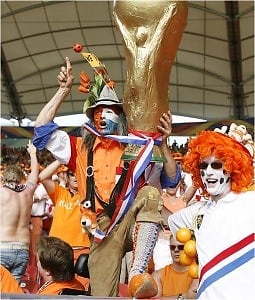 Just as the city's collective summertime soccer hangover finally lifts, the USA Bid Committee for the World Cup is putting on a show for FIFA officials tomorrow in an attempt to woo the world's biggest sporting event back to the nation's capital for 2018 or 2022.  Their strategy?  Show off our two fan favorite, bright 'n shiny stadiums -- RFK and Fed Ex Field. No, really.

Washington last served as one of nine host cities for the 1994 World Cup, which most natives remember less for its kick-ass push pass action and more for the unending traffic and crazed, Carnival-esque mayhem it caused in D.C. streets.  RFK was the stadium used all those years ago...and the 49-year-old venue remains in exactly the same state of perpetual decay today.  Fed Ex Field, on the other hand, isn't exactly beloved by Redskins fans either -- what with the health hazards, jacked up parking costs, mile long walk from the Metro and sundry other perks that seductively whisper “please avoid me.”

Surprising then that the USA Bid would make the centerpiece of Wednesday's tour a "technical inspection" of Fed Ex.  (They were savvy enough to leave RFK off of the agenda -- although it's still highlighted on their website -- because, let's face it, the chances of the D.C.'s grand ol' dame staying up to code, let alone erect, for eight more years are pretty slim.)  Before the tour gets underway, however, the whole delegation will be photo opping it up in front of the Washington Monument at 8:30 AM, which may prove but one thing: if there's anything more boring than soccer, it's a bunch of people standing around talking about it.