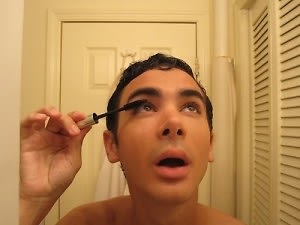 [Adrien Field meticulously applying his mascara] While our moms had "Days of our Lives" on their boob tubes to help get them through their monotony, our generation, raised largely online, has a new form of addiction. It's called www.lookatme.com, and for many it's become an outlet to showcase their every waking movement for everyone to follow. The official name for this genre of drama documentarians has yet to be pinned down, with possibilities ranging from live journaling, to blogging, to tumbling, to tweeting, to 'lifecasting"....it's all the same. And, as Kurt Vonnegut would say, we shouldn't be embarrassed that we are drawn to these characters. Humans have always loved drama, after all....

They also love to brag. And, as a friend recently pointed out, give people a chance to brag without feeling ashamed, and they will go to town. Take the "Gratuitous Photo Of Yourself Wednesdays" (GPOYW) wave that passes over tumbler land each Wednesday. Even I have been known to cash in on that one.

Who needs a Television, when we can watch the best drama unfolding 24/7 direct from our "social media" favorites, all while cleaning up our inboxes?

Also, make sure to check out our "Social Media Elite Yearbook '09"

Here are some of my favorite drama casters to keep your eye on:

Adrien Field. A style expert for Garcon Magazine, Adrien bides his time by scurrying around Manhattan with some singer named Alexandra Alexis, and Mary Rambin (left, who's own adventures can be found HERE). He recently completed a novel about the NY social scene which no one seems to have any idea when will be released (or if it's even been picked up). No matter! He is friendly, and feisty, and we loved him....until he told us that his size (00) is pretty much the only way you can be fashionable. At least he is honest.  [The Day's Of Adrien's Life]

Julia Allison. The fameballer who claims to have invented "lifecasting" (she didn't), just got her hair recolored. Again. She has a whole website devoted to making fun of her, likes to call people "bunny" and tweet about her dates...while she's on them. Some tell us they can't help tuning in much like they wouldn't be able to take their eyes off of an impending train wreck, while others seem to be genuinely interested in what it's like to live in Hell's Kitchen with a very tiny dog and tutus.

[The Day's Of Julia's Life]

Emily Brill. Our world crumbled when Emily Brill took down her personal blog, Essentially Emily. Rumors amounted that her father, Steven Brill, the man that is going to show the world how to pay for content online, pulled the plug on her little shenanigans with Devorah Rose (at left with Brill). It was time for little Em to get a real job. Now she's apparetly writing a book and is "hyperactive."  Once an over-sharer, always an over-sharer....Emily couldn't help starting a Twitter-and promptly blocking us on it:( [The Day's Of Emily's Life]

Jakob Lodwick. First thing's first, I still don't know how I feel about Jakob Lodwick.  We need a heterosexual male to add to the mix though, and Jakob is hard to ignore.  He has a "self-management experiment" going on called the "Standards" which tends to make you feel unbalanced. It's a complete and total waste of time, but somehow there are days you think he may be on to something. Then you hate him for even making you waste a minute on this crap. Then you watch this video and fall in love again.  It's a roller coaster of a ride (much like his highly documented relationship with Julia Allison, above), that you will come off of feeling pretty much unchanged. [The Day's Of Jakob's Life]

Derek Blasberg. Derek is definitely the coolest member of the list so far, if coolness is judged by how many famous people get you to edit their books (ahem, the Olsen twins), sit by them in the front row of Fashion shows, or come to their private parties...which it is. He doesn't even need a personal blog to document his coolness, that's what Twitter is for. He is even hip enough to invent words that become part of the socialite vernacular! Looking for an outlet to feel worse about yourself and your pitiful life? Go read Derek! He's taking on enough fabulousness for all of us.

[The Day's Of Derek's Life]

This is just the tip of the iceberg for some of our favorite "Lifecasters" but it's a good start for you guys to start your addictions.Have one that you think we should start following? Let us know!