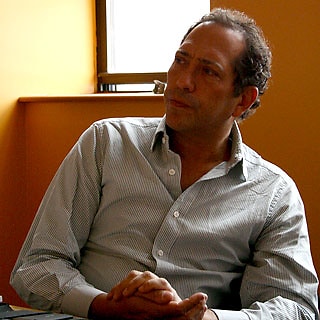 As previously shared, my long running fascination with all things club kids, is largely due to Steve Lewis. When I got the chance to interview the man himself, you better believe I took it. Below, the "naive boy from Queens" tells me all about his favorite "outlaw parties", the nights with Dee Dee Ramone, Michael Alig and the Club Kids, running Moschino's first American fashion show, oh and the several notorious clubs he's designed and run. Steve has helped define our city's night life history, he's met every famous partier over the past several decades, and he is truly a one of a kind New Yorker with a heart of gold. He could fill countless volumes of books with the stories of things he has experienced throughout his long reign as one of our cities' nightlife kings. Until that happens, we will all have to settle for his blog; "Good Night Mr. Lewis", which, in it's very short run, he has already carried on detailed interviews with some key players in the industry including Noah Tepperberg, Danny A, and Wass Stevens. The tables have turned, as I am the one that gets to ask HIM the questions now....

Where did you grow up? What was your childhood like? I grew up in Queens, New York to a decidedly middle class and happy family. We had a house in rural Connecticut also, and my best memories are fishing and walking through dense woods with my brothers and cousin Ron. My window in Queens had a direct view of the Empire State building and each night as I fell asleep, I would look at it and vow to live on one of the upper floors. I never felt even as a lad like I belonged in Queens, I always felt I belonged in Manhattan. I traveled there constantly as a very young kid by subway, it was a time when you could do that without fear, I was too naïve to be afraid of anything which describes a lot of my club life also. When did you start getting into the NY nightlife “scene”? I always wanted to run a saloon. Rick from Casablanca was my role model and I spent years learning to think like him. My first party was my friend Dee Dee Ramone's birthday at Max’s Kansas city. If you can remember years or dates in this biz, you were never successful.

Tell us about your earliest job in the business? I started really working in the biz at Danceteria. I produced a couple of fashion shows with my friend Debbie Marino and then got hooked to a point where I formed my own model agency, hair and make-up agency , pr company and we eventually produced over 400 shows , directed by me and my crew, they included Moschinos first American show, Matsuda, Martine Sitbon, Katherine Hamnett etc. I dated lots of models and it was really a low point, although at the time I thought I ruled the world. Much like many of the promoters of today. We love hearing club kid stories….can you tell us some more about this eclectic group and some of the most outlandish things they did? This is a 400 page book, this question.. I guess many people know I was partners with Micheal Alig before he did tons of drugs and turned from the next Warhol to the next Manson…(not Marilyn). Well Michael once paid a fortune to a group of homeless people who lived outside his apartment by Penn station to build him this huge mansion made of cardboard boxes, he wall to wall carpeted it and lived in it for days with some minions. It was a strange time. My favorite club kid events were the outlaw parties. Whenever it was perceived that a night was going to be slow Michael would throw an outlaw party at some Burger King or park or subway platform. He'd bring a beat box for music some free booze, let it last 30 minutes then call the cops himself, they'd raid it, everyone would scatter and rendezvous back at the club where the party would continue, he'd turn an off night into a bang.

Name some of your best parties you’ve seen in NYC… Bartenders ball with James Brown performing Public Enemy at The World on 2nd street Opening night of the Palladium second time around with Debbie Harry and Coldcut Any Suzzanne Bartsch night at the old Copa on 60th street Isaac Hayes at Life new years eve Cab Calloway , Laurie Anderson at Limelight new years eve Prince 4am performance at Life Favorite place to party in NY currently? I love La Esquina and Snitch Mondays Tell us more about your career path. You were once a fashion producer? A doorman, and interior designer...What is your favorite role? I produced fashion shows, I was never a doorman, I was at the door of clubs I operated. I am an interior designer and have over 50 joints done, including in NY... Butter, Amalia , Aspen, Marquee, Home, Guesthouse , Spa and lots more here and out of town. Who has been your role model (s)? My father, who enlisted on December 8th, 1941 and taught me to be a man, men don’t rat, aren’t afraid of bullies and will fight against all odds to protect those unable to defend themselves. He taught me that a man is only as good as his word. Hes been married to my mom for almost 60 years. Shes a role model too. Also Steve Rubell, Rudolf, Steven Greenberg, Jellybean Benitez, Dee Dee and Joey Ramone and Arthur Weinstein, Steve Salveson, David and Stanley Bard.

What is a typical day like in the life of Steve Lewis? Wake up next to the loves of my life which include my dogs Arturo, and Lulu, my cat Buster and Nicole my gal. I'm at my computer at 8am... I take meetings all over town about design....visit a job site or 3 projects I'm working on, back home, walk dogs, make or order dinner, write or work on design after. Kiss the girlfriend, with pouty look on my face that shes a sucker for and hope for the best… go to sleep @ 4am …repeat.. sometimes I go out and listen to djs...I love club music.

Who do you most respect in the industry currently? Anyone who's staying open and making money in these difficult times but especially Noah Tepperberg and Jason Strauss, Mark Baker, Wass, Jon B, Megan Gaver, Ian Schraeger,

Favorite thing to do on a Sunday afternoon in the city? Eat take out from Gitane then walk the dogs

What’s the best night of the week to go out in NY? Mondays by far snitch, Butter and Johnny Utah's

Your new blog is a must read for anyone interested in knowing more about the nightlife industry, how did you decide to start writing? I decided I couldn’t write a book but I had a lot to say about whats going on in the biz. Everything I read about clubs was just scratching the surface and I thought maybe people wanted a bit more insight. There was plenty of gossip and so little truth I figured maybe I could tell it better or differently than some. With that in mind I gotta say that your blog and dbth amaze me and I'm humbled by the amount of effort you peeps put into it.

What are your summer plans? I stay in New York, walk dogs and grow tomatoes and cucumbers in my backyard.

What will you be doing in 10 years? Don’t know what I'm doing Friday night…. I hope something creative.. maybe I will take your lead and become a fashion designer…?

New York is the best city in the world because….. It surprises me