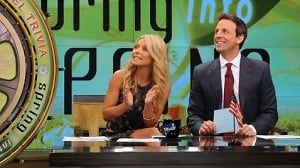 Could our favorite Saturday Night Live head writer be headed to the morning television circuit?  Rumour has it that Seth Meyers is the frontrunner as Kelly Ripa’s co-host on Live! He’s guest co-hosting the show every day this week, the longest co-hosting gig since Neil Patrick Harris’ one week stint on the show this past winter.  And although former New York Giant Michael Strahan and singer Josh Groban are reportedly being considered for the position, we’re rooting for Meyers.... even if it puts our DVRs at risk of combustion.  Here are five reasons why we would be more than happy with more Meyers!