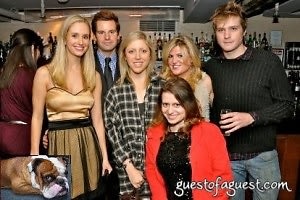 As the end of the year winds down, we will be taking a look back on some of our favorite posts from 2009. Today, our "Most Thankful List." Tomorrow, a look at the best of the best for New Years Eve Parties, both in NYC and other popular vacation destinations like Miami and Aspen. From Thanksgiving 2009: We have so much to be thankful for this year. We live in the greatest city in the world, a place where reality TV show dreams become an actual reality, and the world's prettiest young things flock to for their movie release parties and their hit singles to be debuted amongst the socials dancing within the walls of 1Oak, Avenue, The Jane, (until recently) or even the Boom Boom Room if they're lucky.

Speaking of lucky, the Boom Boom Room on top of the newly opened Standard Hotel makes us realize how thankful we are for resurrections. Besides the scantily clad window guests they blessed us with, we saw an entire neighborhood come back from the dead. Even it's Mayor gave it his stamp of approval. And our own makeover? Well it proved for quite the party, with or without the Tinsley show there, we are all thankful that our site got a shiny new look-even if it did mean the end of an era.

We are thankful for another successful summer out East with Team Hampton. From the Montauk bound surfers to the crispy Quoguers, we loved tramping up and down the other island with you all. We would even be willing to get sprayed all over in AXE for one more beach day together. And Nantucket! We're just thankful you exist.

We are thankful for the planes, trains, and automobiles that carried us to cover our favorite destinations. Not to mention the occasional booze bus, Jitney, helicopter, and boat rides.

We are thankful for each and every "Best $2k" photo op, as well as our new tshirts to celebrate them.

We are thankful for the opportunity to run around town like Mad Men in order to keep up with all of the openings and re-openings, the anniversaries, the birthdays, the premieres, the dinners, the fêtes, the soirees, the cocktail parties, the galas, the benefits, the balls, and the red carpets at them all.

We are thankful for the socialites, the celebrities, the PYTs, the musicians, the hipsters, the social media nerds, and the fameballs that have provided us with more material than we could ever hope for, even if it meant being scuffed around a bit.

From Yacht Rock parties, to Fashion week, to hanging out with the 50 hottest bachelors, to rooftop BBQs and late nights out, we are so very thankful for it all. To our photographers, our writers, and our interns, we could never have done it without you.

But most of all, we are thankful for our loyal readers and newsletter subscribers. It's an honor serving you every day.

Thanksgiving 2008: [Over 50 NYC Socials Tell Us What They Are Most Thankful For This Thanksgiving]